Single Instruction Multiple Data (SIMD), also known as vectorization, is a powerful technique for accelerating computer vision algorithms. In this post, I will explain the concept and then introduce an easy way to use it inside your codes. We will see how we can benefit from SIMD to further reduce the runtime of the Gaussian-blur function that we implemented in the previous post.

SIMD allows us to access, subtract and save the output pixels two-by-two, four-by-four, eight-by-eight and etc. (depending on the datatype of the pixels). In other words, 2, 4, 8 and even more subtractions can be performed in one CPU cycle. So, a Single Instruction (here subtraction) can be applied to Multiple Data (here pixels) simultaneously. Note that this is not multi-threading. SIMD happens inside each core.

SIMD units are hardware components with their own registers. Packs of data are first loaded into the SIMD registers, then a single instruction is performed on them simultaneously, and the results are stored back to the main memory. 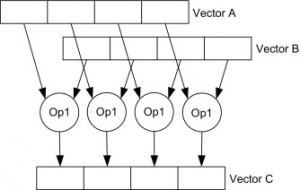 The above figure shows two sets of 4 float(32bit) data loaded in 128bit SIMD registers. There also exists 256bit and 512bit SIMD registers in new CPUs which can load more data and do more operations at the same time.

Generally, there are 4 ways to use SIMD. I sort them based on the ease of use and code portability (ascending).

It’s more like a suicide! Let’s forget it and see other options.

Intel has developed SSE and AVX intrinsics. ARM has developed Neon intrinsics. These are much much better than assembly but makes your code very messy and unreadable. Also, because each CPU vendor has its own set of intrinsics, you have to write your code in multiple versions if you want it to be run on different architectures. We prefer a solution that gives portability: writing one version and running it on all the architectures.

This is the best option. Some nice people have developed SIMD libraries that give us easy-to-use, high-level, and readable functions that can run on all CPUs. OpenCV is one of them :)

If you don’t want to get your hands dirty with SIMD, then this is the best option for you. It doesn’t work always but it’s as easy as tweaking some of your compiler flags. For example, if you use GCC, then put -ftree-vectorize, or -O3 in your command. You may be curious to see which parts have been vectorized and which parts have not. GCC provides some flags for this too. It reports both the successful and missed vectorizations. If you think a code block can be vectorized but GCC has not been smart enough to do it for you, then you can guide it by OpenMP SIMD directives.

Okay… Now that you have got familiar with SIMD and the ways to use it, let’s implement a vectorized convolution. I pick the best version of the Gaussian blur in the previous post and vectorize it using the Universal Intrinsics of OpenCV.

The vertical convolution of the Gaussian blur function can be easily vectorized by this scheme: 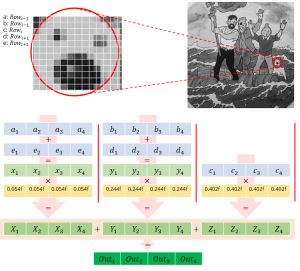 The code will change from :

I’ve got my MSc degree in photogrammetry with focus in embedded computer vision. I’m passionate about robotics and visual perception. This blog is to share the tips, tricks, and hacks I’ve learned in the field.