In praise of ROS

The first time I heard its name was 3 years ago in a robotic course. It seemed to be a big complex stuff for me which I tried to escape as much as I could. Soon after building the first ROS application, my interest increased in such a way that I like to ROS-ify almost every project that I’m involved in. This post explains the basic concept behind ROS and its benefits.

1. It’s all about message passing

I’ll go through the details of ROS step-by-step. But for now, imagine ROS as a super-big library that is installed on Linux (and recently windows). This library provides an environment where you can simultaneously run multiple programs that can talk and listen to each other. For me, ROS evokes a place with several routers (programs) inside it that can emit/receive signals to other routers (programs). 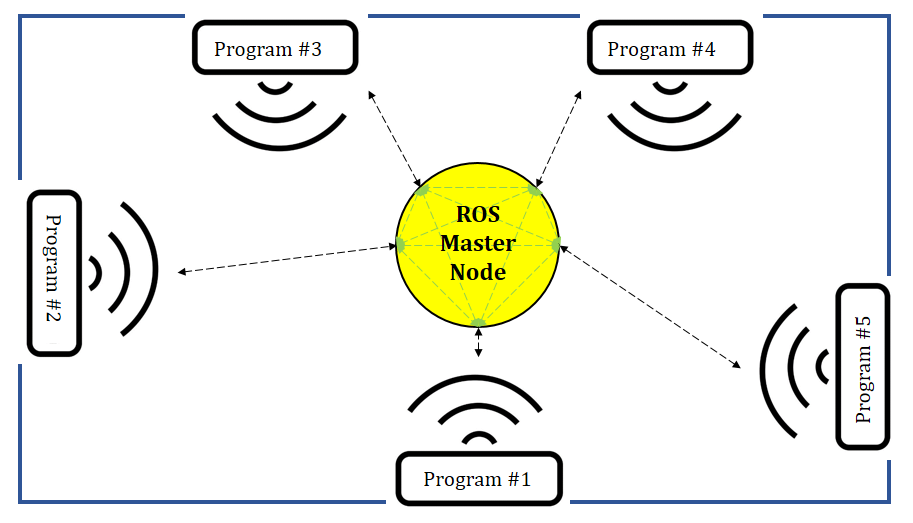 Industrial-level projects often include several modules and sub-modules that must work together. Using ROS brings you these advantages:

ROS is an ecosystem with its own words. Having sense about them boosts your learning time.

In ROS dictionary, a program is called a node. As mentioned, industrial-level projects have several programs/nodes. These nodes can talk/listen to each other via messages (any type of message ranging from simple strings to image and point clouds). Each message must have a specific name called topic. A node that talks to others is called publisher, and a node that listens to others, is called subscriber. But this doesn’t mean that a node has to be only publisher or only subscriber. You can write a node that subscribes to a topic, and then based upon the contents of the subscribed message, publishes another message with another topic. This is quite routine when you develop in ROS.

A collection of nodes that perform a specific task, is called a ROS package.

ROS has excellent step-by-step tutorials on its website. You have to first install it. There are different distributions and it might be confusing for the first time to select which one. Install the newest LTS distro (currently, the newest is ROS Melodic). After installing, learn to create a catkin package and write a simple publisher/subscriber.

I’ve mainly used ROS for developing vision parts of robots. You might think that ROS is heavy for single board computers but I have installed it even on the low-powered Raspberry Pi Zero (single-core armv6 running at 1GHz and 512Mb RAM). There are some tips you should consider when using ROS in such resource-constrained systems:

6. What if I need to communicate with a non-ROS device?

Robotic projects often include microcontrollers with no operating system, and thus no ROS. Also, there might be situations where you want to communicate with a Windows computer with no ROS. There are some solutions like rosserial, ros#, and rosbridge but I found them a little bit hard to handle because of poor documentation. I suggest you to use Python Sockets. They are very easy to use and well documented. All you have to do is to create a python ROS node, import socket, and then implement your communication either as a server or client. This post is a good starting point. If you don’t like Python and look for a C++ solution, then check boost.asio or Qt Network module.